Jana Lapel began singing in church at the age of three. She grew up in a musical family in Iowa, hosted and sang on her own radio show at age sixteen, and later launched her professional singing and acting career in Chicago. Jana appeared in musical theatre productions, in film, on radio, television, and toured with her own nightclub act. Her international credits come from performances in Europe, Mexico, the U.S. and Canada.

In the mid-seventies Jana moved to Edmonton, Alberta, Canada and joined the local music and theatre community. She taught voice at MacEwan College and created “Christy Clown & Friends”—a popular children’s theatre-style clown troupe. Jana produced and hosted shows on Edmonton’s channel 10, including a series for children called “Recess”. Her band, Jana Lapel & Company performed for the Queen during the Commonwealth Games in 1978. They also appeared on the Alberta Pavilion stage for Expo ’86.

In the late-eighties Jana returned to the U.S. to perform in the Minneapolis area. After this fourteen-month stint in the Twin Cities, she came back to Edmonton and joined the CKER Radio team. As the host of her own show “In Touch with Edmonton”, she was frequently asked to sing and share her personal testimony for church and community gatherings. This was long before the #Me Too movement began, but she felt the “call” to be a voice for the voiceless.

Jana’s private life “under the makeup”—was marred by enduring the aftermath of child abuse, broken marriages, as well as mental and physical health challenges. She knew that one day she would tell her story in a book, but in the meantime she chose to “sing her testimony”—recording a CD collection of inspirational songs entitled: “I’m So Glad”. (see audio albums)

In 1990 Jana met Gerry O. Denis (initials G.O.D.) in a support group. She called their meeting a “Divine Appointment”, claiming they met “inside out”! Gerry not only fell in love with Jana—he also fell in love with clowning—joining her troupe as “Denee the Clown”. (He was also a teacher assistant with disabled students for Edmonton Public Schools). The clown troupe had begun to record their CD – ‘A Trunk Full of Twenty Tunes & Tales’ prior to Gerry’s passing in 2007. They completed the project in 2008, as a memorial dedication to “Denee the Clown”. (see Tribute to Gerry—listen to CD samples in audio)

Jana says her difficult new role as a widow was perhaps her most challenging, because after finally experiencing unconditional love she was once again “flying solo”! Eventually she felt strong enough to begin the journey of writing her autobiography “Under the Makeup…It’s Me!” In her book Jana shares how she hid behind the “masks” of the many roles she played both on and off stage—finally finding the courage to heal and be real. She hopes her transparent “truthtale” will encourage others to seek their own path to healing and recovery. 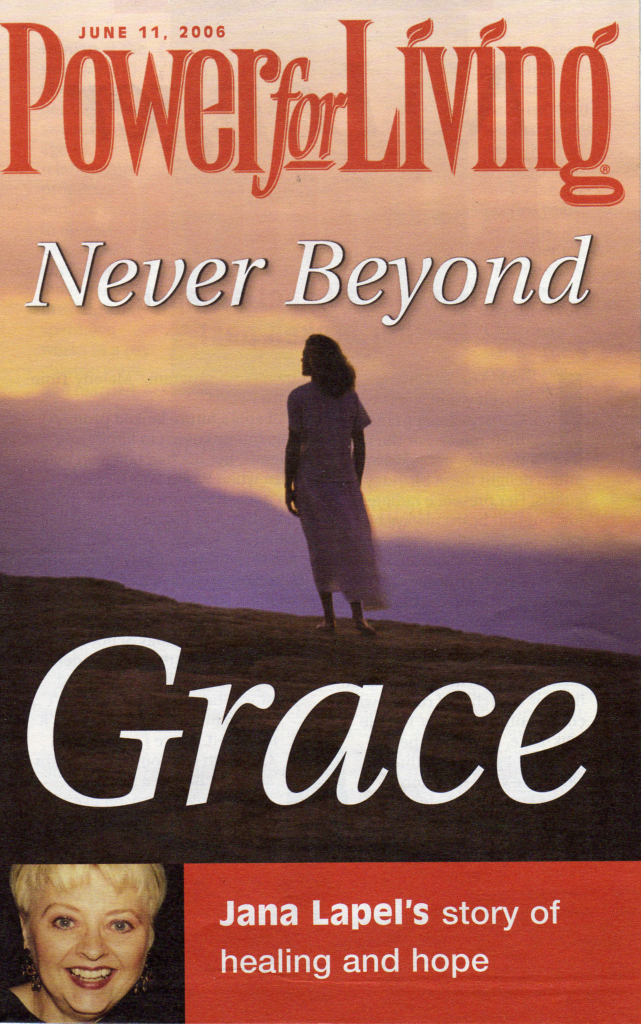 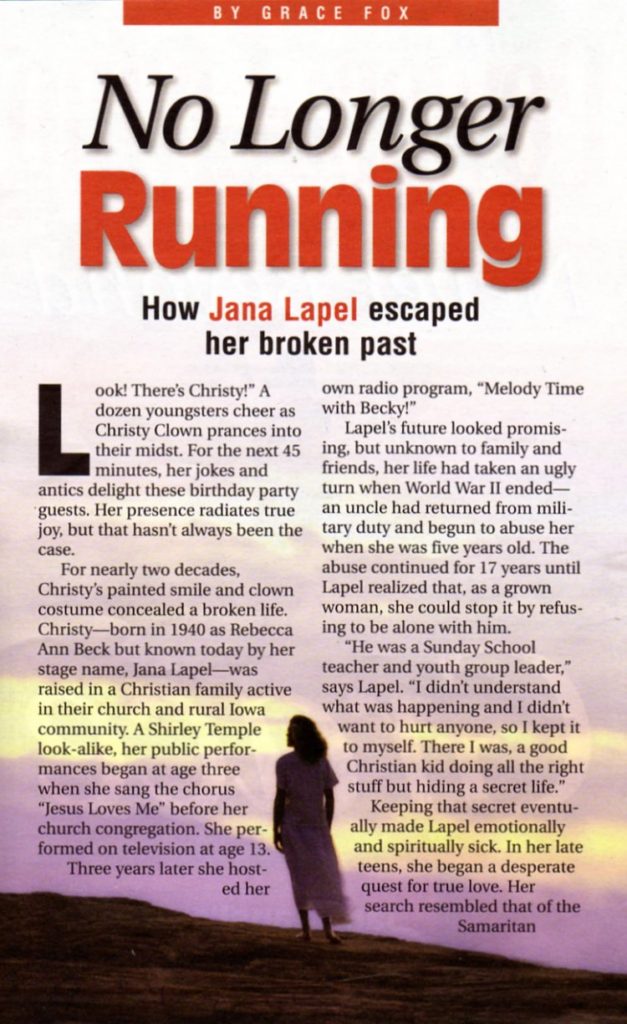 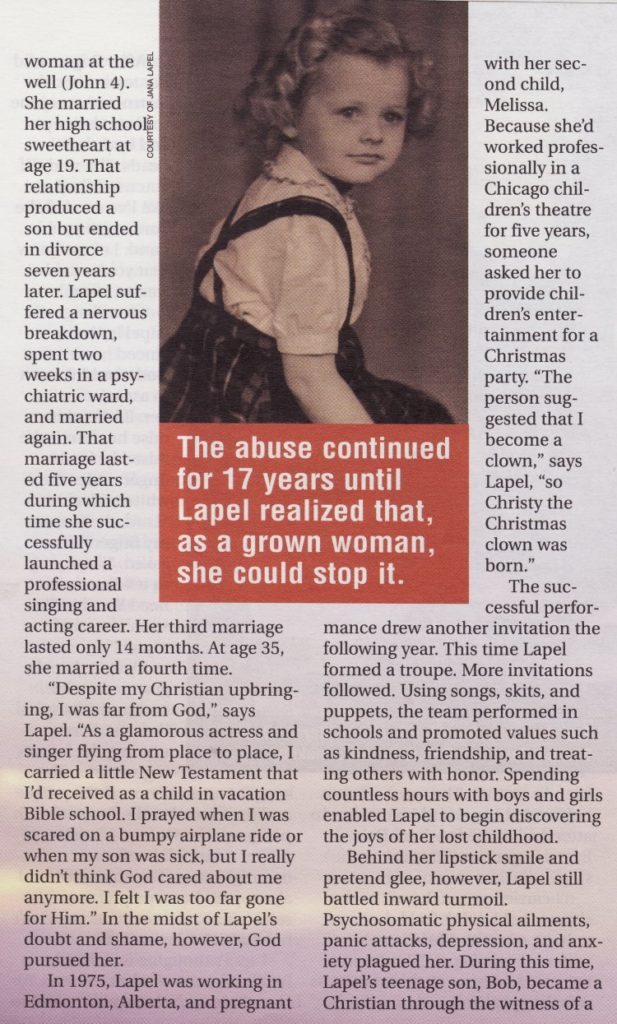 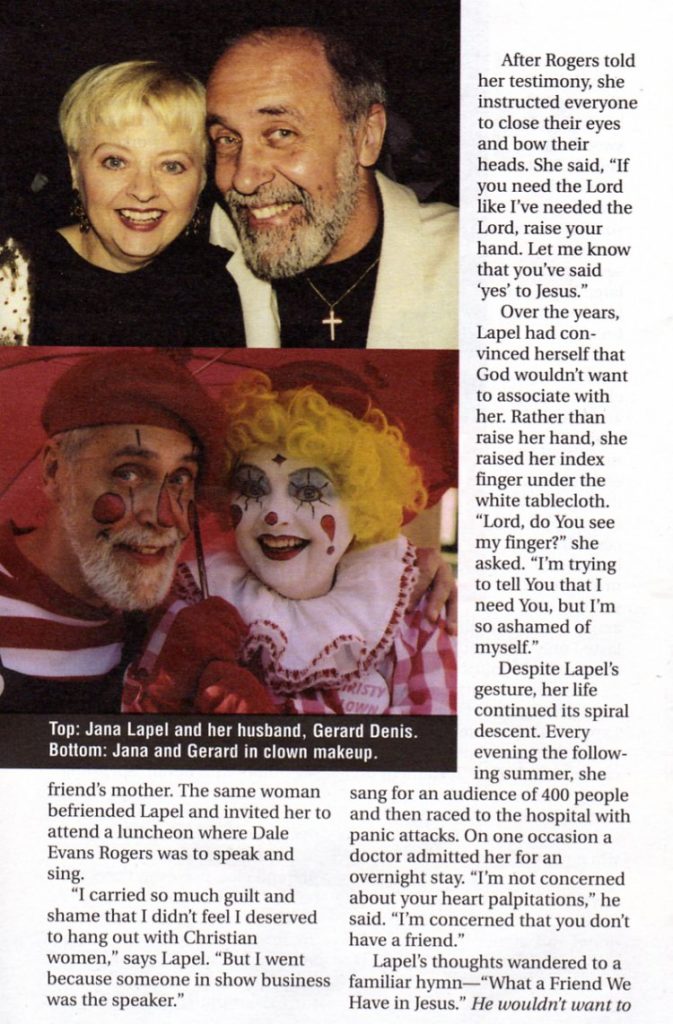 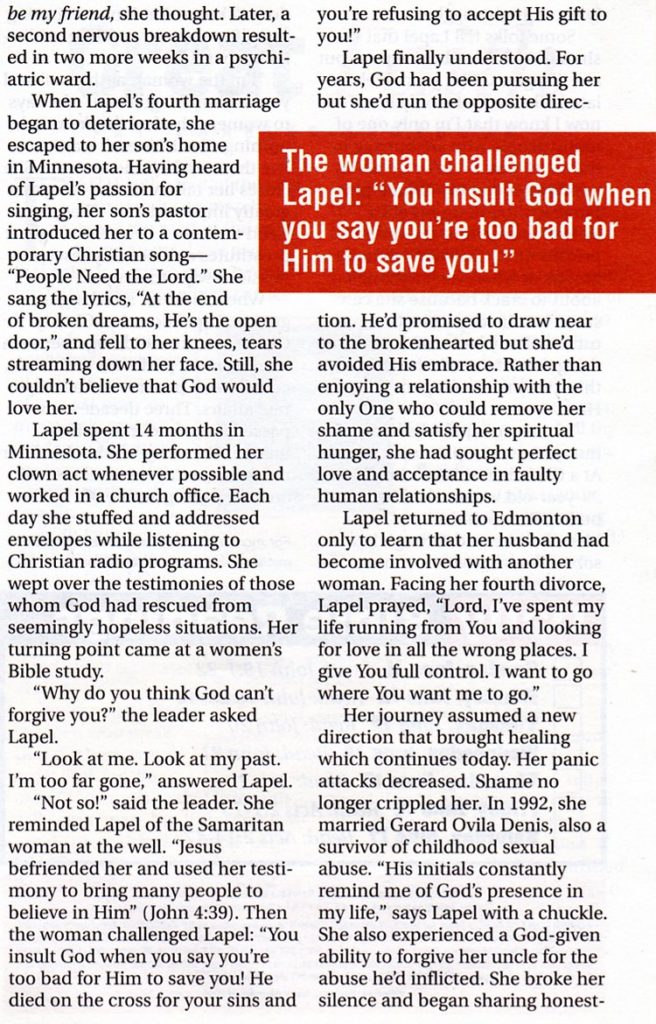 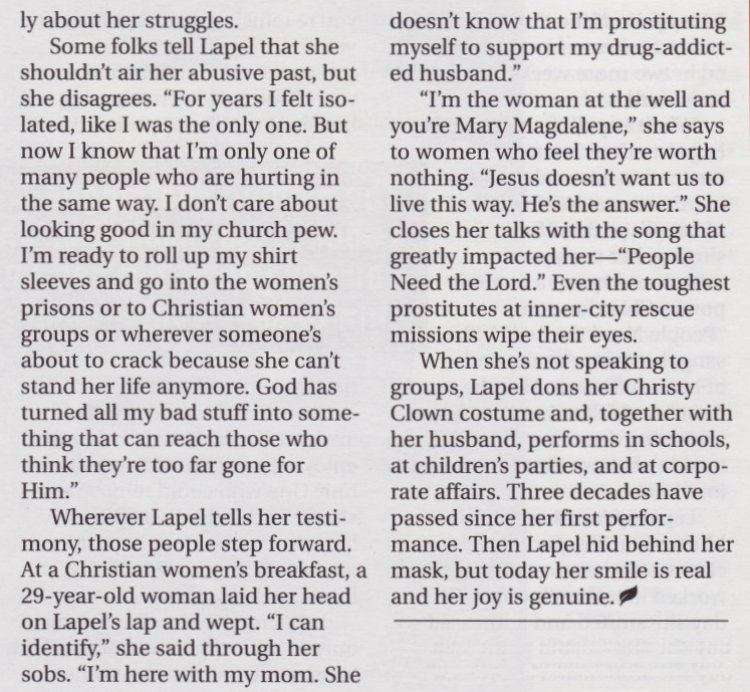