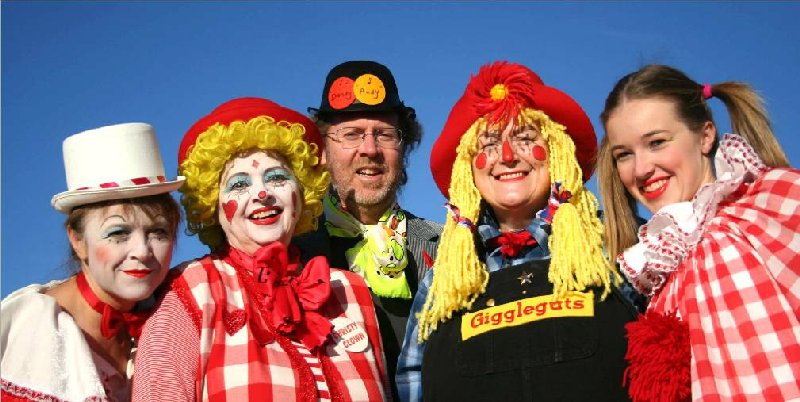 “Christy Clown” was created by Jana Lapel in December, 1975—her first Christmas in Canada—after moving to Edmonton that fall. As a favour for her agent, who needed a children’s entertainer for a family Christmas party, Jana agreed to take on what she thought was a one-time gig. The agent remembered that Jana had portrayed multiple roles as a member of a children’s theatre company back in Chicago, and suggested Jana be a singing Christmas Clown!

Jana had no idea that this performance was the start of a new chapter in her career—and that she would enjoy a forty-year run in that red and white-checked clown costume—nor could she have imagined how much personal healing would come through her work with children.

Eventually, Jana added a piano player and two dancer-sidekicks to form the musical troupe—”Christy Clown & Friends”. Over the years there were many talented performers who appeared in the show, including Jana’s daughter, Melissa, who headed up the face-painting crew and the addition of their balloon animal artist, “Denee the Clown” (Jana’s husband).

During the 1980’s when Jana produced and hosted the “Recess” TV program on Channel 10, Christy Clown was a regular member of the cast, presenting the “Ten Award” for outstanding service and achievement by elementary school students. Jana (and Christy’s) mission statement was based on The Golden Rule: “Treat others as you would like to be treated!” Her popular puppet show was a teaching tool that dealt with self-esteem and caring for others. Jana was blessed to be a “Joy spreader” on both sides of the Canada/U.S. border, taking her positive messages to schools and daycares, birthday celebrations, and community and church events.

Although the clown troupe officially retired in 2015, Christy Clown continues to make occasional “solo” appearances by special request. This singing clown often shows up as the “surprise finale” in Jana’s “Broadway to Gospel” programs.